Read and weep (and savor).  Thanks, Wright, for getting it right.

And I love it when a coach mixes his metaphors.  Thanks, Coach Wade.  Not sure if you meant “kowtow” or “bow down,” but either way, give it your best shot.

Fortunately for you, Roy Williams seems to think it won’t really be needed.  Hell, all they gotta do is pack??!!

Bring it, you and your similarly over-paid colleagues!

Got our mojo working

Sunday’s game against Washington (not too keen on their name) wasn’t pretty.  Well, actually, yes it was.  Both teams actually played pretty well, but we were the beneficiaries of some amazing and timely turns of events. I don’t know what their order of importance they have, but here’s what made it work for us:

This was one that the “old” Saints would have lost and the “new” Saints probably should have.  But I’m with Brees, who notes that we’ve had more than our share of Washington’s experiences in our history.  This was our good fortune, but we’ve had the bad fortune many times.

One thing I hate is athletes claiming they won because, “We refused to lose,” or, “We just wanted it worse than they did.”  I much prefer Jonathan Vilma’s reminder that sometimes it’s better to be lucky than good.  Amen, and there’s no shame in saying we caught some breaks.  But if we weren’t a good team, we wouldn’t have been in position to get them or to capitalize on them.  And that’s why this team is great.  Not good, Great.

BTW, I knew we were in trouble, but I didn’t know it was THIS bad (thanks A-train). 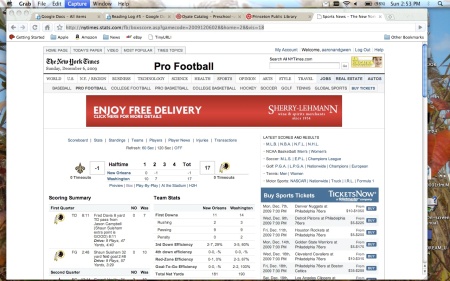 Douchebag of the Day: Rich Rodriguez

While normally I don’t care about the suffering of this prick and how he continues to make Michigan fans miserable (which I secretly enjoy, since I have a number of MSU fans as friends), but when ANYone starts comparing their candy ass struggles to Katrina, it’s on.

It’s really kind of ironic that the New Orleans Saints overcame the hurricane a few years back. I used to live and coach in New Orleans for a couple years, and I know how devastated that city is and how they overcome and rebuild the stadium and rebuild the program.

And we’ve had a few hurricanes of our own. We had a big hurricane in August, and it kind of hit us like a ton of bricks. But you had 120 young men and a bunch of people on the staff that said this is not going to tear our program apart.

Alright, for a big Saints game like Monday night’s, I lose that day and the next to scouring the Internets for any and every mention of the game.  A few observations: