Me and My Coccyx

So on 12th Night, I was dutifully putting up our Mardi Gras decorations, and I took a bit of a spill.  Everyone says I fell off a ladder, but it would be more precise to say that the ladder dropped me.  Here’s what happened.

Several months ago, our insurance company required us to install a handrail on each set of steps on our front porch.  It was expensive, but we’d wanted to do it anyway, so fine.  Well, even though for 8 1/2 years I’ve been leaning our ladder against the columns to put up the stuff several times a year, the new handrails screwed up the angle at which I lean the ladder.  Well, in a bit of a fluke (unless you buy the conventional wisdom that I’m just a klutz), it started raining as I was on the last column, with the ladder leaned at that precarious angle.  Well, a little wiggle from me was all it took, and the ladder slipped out from under me, and I landed–ass-first–on that handrail.

I find it ironic that the safety device ended up causing me incredible pain.  Yeah, I could’ve been more careful, but that kills the beauty of the story.

Anyway, it’s been almost 3 weeks, and I’m still in some real pain.  We left the Crosstown Classic (congrats Nuggets & Rush!) early because I couldn’t sit any longer.  I can’t lie on my back, and any exercise starts to hurt.

The problem is that I’ve dislocated my coccyx, a useless part of our bodies that’s the end of the vertebrae.  My doc says this is a new one for him, in that the nature of the dislocation is unlike any he’s seen from trauma.  So we’re not sure what to do, but because I seem to have reached a plateau in my recovery (it’s a hell of a lot better than it was, when I couldn’t stand without wincing in agony, but still I won’t go on like this if I can help it), I expect to have surgery to remove it.  They don’t think they can get it back in place.

The coolest thing about that is I’m hoping they’ll let me keep the bones to make an earring.  Anyway, here’s the CT scan, and the damage is at the bottom in the right-hand 3rd of the image.  I think it’s supposed to be lined up with the rest of the white stuff, but I’m no Alfred Einstein. 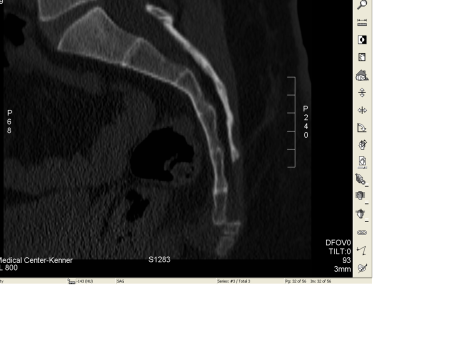